This is part 8 of an article series on emulation development in JavaScript; ten parts are currently available, and others are expected to follow.

Please note: This article has been updated to remove an incorrect interrupt handling procedure. --12th Nov, 2010

In the previous part, the foundations for simulating a game were laid, with the introduction of sprites. However, one aspect was missing from the emulator: the vertical blanking interrupt. In this part, interrupts as a whole will be introduced, and the blanking interrupt in particular will be implemented; once this has been done, the emulator will run Tetris.

Imagine that you have a computer with a network card, and some software that processes data from the network. From the perspective of the computer, data only comes in every so often, so you need some way for the software to know that new data has arrived. There are two ways for this to happen:

It's obvious that the concept of interrupts is a useful one, but there are both hardware and software requirements for interrupts to work. In hardware terms, the CPU has to temporarily stop execution of what it's doing when an interrupt arrives, and instead begin execution of an interrupt handler (sometimes referred to as an Interrupt Service Routine). In the above scenario, a wire is run between the network card and the CPU, allowing the card to inform the CPU when data has arrived. 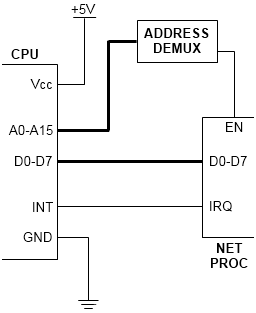 The CPU will check its interrupt inputs at the end of every instruction. If an interrupt signal has been given by some attached peripheral like the network card, steps are taken by the CPU to start the interrupt handler: the CPU will save the location where it left off normal execution, register the fact that the interrupt happened, and jump across to the handler.

In the GameBoy, there are five different interrupt wires, feeding in from the various peripherals. Each one has its own ISR at a different address in memory; the list of interrupts is as follows.

Table 1: Interrupts in the GameBoy

Table 2: Interrupt flags in the MMU

Since these are memory registers, their implementation is something for the MMU:

The Z80's "master enable" switch is, in a similar manner, something for the Z80 implementation. The CPU provides opcodes for software to flick the master enable into either On or Off position, so these will also need to be implemented:

As shown in Figure 1, the emulator has reached a reasonable stage: it's able to emulate a released game in at least some form. It does, however, have the problem of game size. Tetris is a 32kB ROM, and fits perfectly into the "ROM" space in the memory map. Games tend to have larger ROMs than this, and the cartridge follows a process of mapping portions of the ROM into memory. Next time, I'll look at the simplest available form of ROM mapping for the GameBoy, and its implementation on a 64kB game ROM.