Steganography is a name given for a set of techniques where the targeted message is hidden inside other data, most often in the context of an image in some form. Common forms of steganography include deviations in the level of individual pixels, or changes to the low-level noise components of the image. In this article, I'll look at a technique that produces an image which is also a program, which can be run to produce the targeted message.

The program to be encoded, then, is as follows:

In order for the program to be converted to an image, the first step is to take the program as a stream of numbers. In Brainfuck, the eight operators can be treated as eight numbers to be inserted into a stream:

Hiding these values within image data would be difficult if the data were full-colour (24- or 32-bit), since the colour component would need to correspond exactly at a given point in the image. Instead of using full-colour images, it makes more sense to use palette-based images, where an 8-bit palette index refers to a table of colours defined beforehand.

A simple example of palette data would be a graded greyscale image of sixteen shades, like the one below:

If this image is produced in a standard fashion, a palette of sixteen entries and 240 blanks is saved alongside the image. By expanding the palette entries used to the maximum allotted number of 256, it's possible to use the extra entries for hiding information:

Before applying this concept to the example image in Figure 1, it's important to consider the type of image needed for this to work.

The major issue presented by image formats is that of compression: in order to make the image file size smaller, various methods of compression can be used to translate areas of similarity in the image to a much smaller amount of data than that represented by the raw image. Of course, when this is done the resultant compressed data bears no superficial relation to the raw image data; attempting to encode a Brainfuck program into the compressed data stream is beyond the scope of this article.

Instead, I'll be focussing on the raw image data itself; storage of the raw data can be achieved through an uncompressed data format such as TIFF. Examples of uncompressed 8-bit palette image formats include BMP and PCX; the former will be used here, due to its prevalence as a major image file format. When used as an uncompressed 8-bit format, the structure of a BMP file is as follows:

The end result of this process is to produce a bitmap file that can be run as a Brainfuck program; to that end, we must be careful that the header data and colour table don't contain Brainfuck operators that may corrupt the initial state of the program. This is, fortunately, relatively easy: all that is needed is to pick an image width and height that don't contain an operator within the byte values, and the rest should automatically fall into place.

One other quirk of the BMP format is the order in which pixel data is stored. Most image formats treat the first row as the top row, in accordance with computer graphics principles; BMP lines up with mathematical graphing principles, and treats the bottom row as the first.

Figure 2: Position of the rows in a BMP

This means that the Brainfuck operators need to be encoded into the image starting at the bottom, running left-right, then moving up to the next row. By examining each operator in the program in turn, and finding the next appropriate pixel (of the same row in the palette) to replace, the following result is obtained. 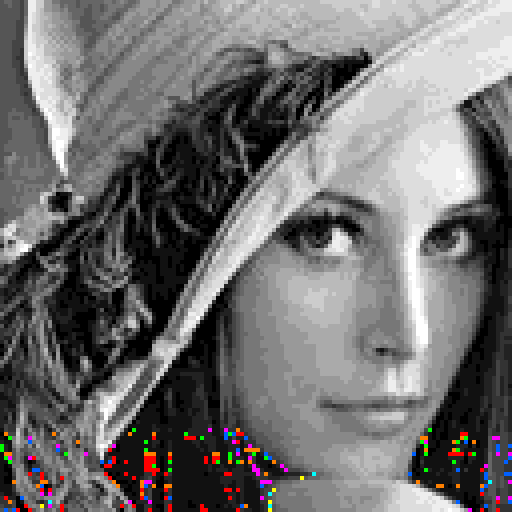 Figure 3: Lena, encoded with the targeted message, at 400% zoom

Once the appropriate pixels have been replaced with versions shifted along the palette row, the palette can be amended to set the Brainfuck operators to the same colour as the rest of the row in which they reside. Doing this, and producing an uncompressed bitmap of the result, provides the following.

Figure 4: The original image, and the image encoded with the target message

Running the bitmap image, shown on the right, through a Brainfuck interpreter results in the targeted message being revealed.

$ php -f brainfuck.php http://imrannazar.com/content/img/bf-bmp-final.bmp The monkey is in the dishwasher$

The process outlined above is simple enough that it can be automated: given a sixteen-step greyscale image, seek from the bottom left for a pixel in the desired palette row, replace the pixel and move forward. This, however, isn't ideal for steganographic purposes; the Brainfuck operators leave a unique signature in a bitmap of otherwise uniform numbers. There are two simple ways to increase the level of obfuscation: