One of the major historical issues with the transmission of computer programs over the Internet has been how to avoid encoding problems: with FTP, for example, a file sent in text mode may have its newline characters translated by the FTP client into different values. For a program file, this would change the meaning of the code, and may result in failure when the downloaded file is executed.

The issue of transmision encoding is obviously a solved problem: FTP has a binary mode, which avoids text-based translation, while email has MIME-formatted attachments for the inclusion of files. Another way to approach the issue, however, is to produce executables which avoid the occurrence of the problem. Since a program, like any file, is nothing more than a stream of numbers, we can alleviate the transmission issue by producing programs which only use numbers that would be found in a text file; in the ASCII encoding standard, we can define these numbers as the "printable range", between 32 and 126.

Depending on the target CPU for the executable program, the limitation of only using the printable range will have different effects: for some processors, it is impossible to write a program under these constraints. In this article, I'll be looking at the combination of the x86 PC and MS-DOS, since this allows for a wide range of instructions to be used.

Opcodes in the printable range

Since the x86 base instruction set is derived from the 8080 CPU, a number of groups of instructions fall under the printable range, including conditional branches and arithmetic manipulation. The full list is as follows.

As can be seen in the above list, a good selection of opcodes is available in the x86 printable set; this allows three possible methods for producing programs using these operations:

As mentioned above, the concept of Base64 can be applied in this case. Base64 encoding treats the program file as a long number, modulo 64: under this base, a number provided as a stream of bytes can be evenly divided into a stream of digits.

The canonical Base64 encoding is an adaptation of the concept behind hexadecimal: instead of using the standard denary digits in their normal position, the letters of the alphabet are used first. Values 0 to 25 are represented by the uppercase letters A-Z, 26 to 51 by the lowercase letters, and 52 to 61 by the digits 0-9. The remaining encodings 62 and 63 change between variations of the Base64 model, but are used as + and / in most variations.

This canonical encoding skips around the ASCII character set, which makes for complexity in the encoding and decoding algorithm. In the case of this article, the particular characters used for the encoding are unimportant as long as they are within the printable range: the algorithms are simplified if a contiguous range is used, so for simplicity a range from 32-95 will serve as the translation endpoint.

Encoding of the program for transmission can be performed by an external utility; the following C extract will produce a contiguous-base64 encoding of a source file.

cb64-encode.c: Encoder to contiguous base64

With the source program encoded into the printable range, the remaining part of the process is the inline decoder. In theory, this is a simple reversal of the above code; the issue is complicated by the fact that the decoder must be written using printable opcodes only. In addition to using printable opcodes, some of the opcodes in the x86 instruction set use an optional ModR/M byte to specify their arguments: this additional byte defines the source and destination for the operation. A few examples:

As can be seen above, the ModR/M byte can take on any value, and each of the possible values encodes to a combination of source and destination. Of course, only some of these combinations encode to printable byte values: those selections are shown below.

Table 2: Printable values for the ModR/M byte
addr is 16-bit, disp is 8-bit

Due to the limitations imposed by both the opcode range and the allowable addressing of ModR/M bytes, a few techniques have to be employed in code production:

Using these techniques, it's possible to write the reverse decoder for the printable-opcode encoder detailed above, and attach the encoded program to it. The resultant program is shown below, in NASM assembly format.

linenoise.com: Input program to be encoded

The above encoded program runs in the same manner as the original, and produces the following output: 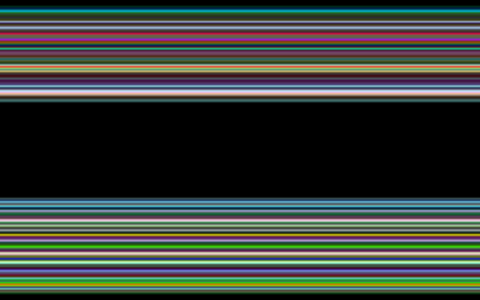 There are a few issues with this encoding mechanism. Firstly, it is heavily tied to MS-DOS .com programs, since the decoder is itself a DOS program and relies on the initial conditions provided by the MS-DOS program loader. Furthermore, it has a fixed destination for the decoded program of CS:1000h, which only allows programs of a little under 4 kilobytes to be used without modifying the decoder.

These issues, however, can be overlooked if the use of the encoding mechanism is kept to the domain of graphic demos and other simple programs which are to be written using printable opcodes. That domain may, of course, not be a large one.